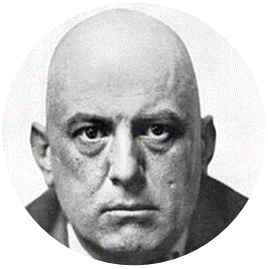 Edward Alexander Crowley (1875 October 12 - 1947 December 1) was a Satanist who was nicknamed The Great Beast. As a young man, born into a wealthy upper class British family, he became an influential member of the esoteric Hermetic Order of the Golden Dawn. His motto within this Order was Perdurabo, which is Latin for I will endure to the end. Next, he founded the religious philosophy of Thelema (a Greek word meaning Will), and he became the leader of an occult society named the Ordo Templi Orientis (O.T.O.), which is Latin for Order of the Oriental Temple.

Crowley is widely thought of as the most influential occultist of all time. Most people seem to ignore that is was Black Occultism that he practiced. Allegedly, he was also a spy for the British government (MI6).