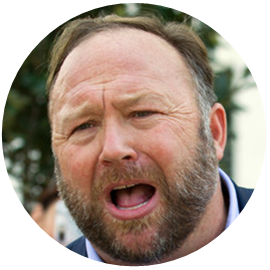 Alexander Emerick Jones was born on 1974 February 11. He is a Zionist shill. His website is Infowars.com. As a squeaker, his roles are fear mongering and to cause disturbance. He was not only married to a Zionist woman named Kelly Rebecca Nichols, nicknamed Violet (which resulted in three children), his radio show is also sponsored by at least 34 Zionists. Some claim that the original Alexander Emerick Jones was replaced at the end of the previous century by the CIA agent nowadays known as Alex Jones.