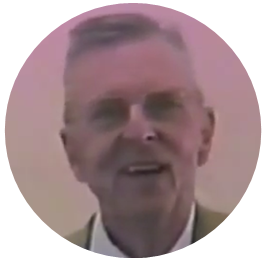 Howard Leonard Freeman was born on 1913 December 28 in Sayville, New York, USA, as the son of Minnie and Albert Freeman. In 1932, he graduated from high school in Bristol, Connecticut, USA, and then began his career in engineering. He was employed with the USA Department of Agriculture and Forest Service as a Civil Service Engineer. Prior to that, he had worked for the Burlington Union Pacific Railroad. He attended the University of Montana in Missoula, majoring in Classical Economics, which motivated him to lecture on that subject, both abroad as well as widely in the USA. He and his wife Ingrid lived in Lusk, Wyoming, USA.

In the below-embedded video recording of Friday morning 1986 July 4, Howard starts by referring to the Gospel of Matthew, chapter 10, verse 16: Behold, I send you out as sheep in the midst of wolves; so be wise as serpents and innocent as doves. This means, according to him, that only the shrewd application of the Truth can enable the innocent to stay unharmed from the maleficent wolves. Next, he explains the fundamental difference between two forms of (legalized) government: de jure and de facto. The first he calls lawful (meaning: righteousness), and the latter legal (meaning usurped power). Therefore, it is essential to know that any legalism is presumed to be lawful unless it is timely and specifically challenged for its lawfulness. Furthermore, due to even more trickery, Equity Legalism became under Admiralty Legalism, after which it was renamed Statutory Legalism, acting as Statutory Policy. Also, it must be understood that only the knowingly, willingly, and intentionally entering into a contract results in a valid contract. For more on this, see what he wrote in 1991 about the UCC connection, together with other online sources.