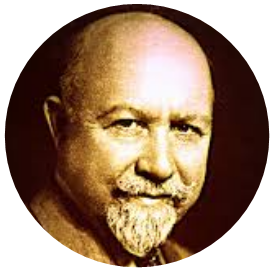 Walter Bowman Russell (1871 May 19 - 1963 May 19) married on 1894 January 10, at the age of years old, with the 20-year-old Helen Andrews (1874 - 1953), with whom he had two daughters, and later two granddaughters. In 1946, the 75-year-old Walter met the 42-year old Daisy Stebbing (born as Daisy Eveline Cook on 1904 November 6; who died on 1988 May 5). On 1948 July 19, the 77-year-old Walter divorced his first wife after 54½ years of marriage. In that same year, Walter married the 43-year-old Daisy, who he affectionately called Lao, derived from the name of the ancient Chinese philosopher Lao Tzu (604 - 507 BCE), also spelled in English as Lao-Tze or Laozi, of whom she allegedly would have been have the reincarnation. Walter, who claimed to be the reincarnation of the famous Leonardo da Vinci (1452  1519), and Daisy (a.k.a. Lao) worked together for fifteen years and founded the University of Science and Philosophy on their country estate in Swannanoa. allegedly with the capital that Lao gained by setting up a cosmetics company. Walter and Lao developed a home study course in what later became know as Russellian Science, and published several books, such as The Universal One (1926), The Secret of Light (1947), The Message of the Divine Iliad (1948), A New Concept of the Universe (1953), Atomic Suicide? (1957), The One-World Purpose (1960). Walter died on his 92nd birthday.

Although this so-called Russellian Science might help to break free from university-based religion of scientism, it neither offers any genuine scientific explanation. Some of it is New Age nonsense, which Walter added to the ideas that he copied from the book The Kybalion, which was published in 1908. Based on his financial situation and the type of projects he was granted to do, it is pretty safe to conclude that he served the hidden agenda of the global control freaks.