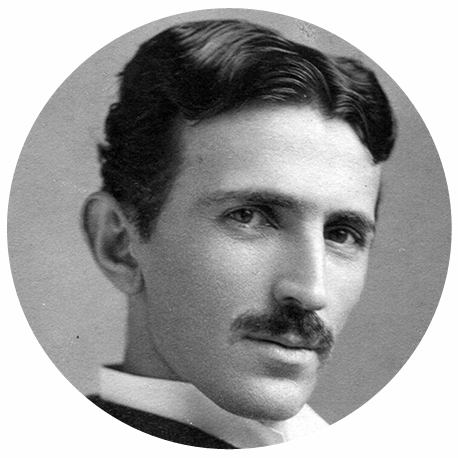 Nikola Tesla was born on in Smiljan, a village in the mountainous region of Western Lika in Croatia, on 1856 July 10 (shortly after midnight) as the fourth child and second son of Milutin Tesla (1819 February 3, Raduc  1879 April 17, Gospic) and Georgina-Djuka Mandić (1822, Tomingaj  1892 April 4, Gospić). His father, Milutin Tesla, was an Eastern Orthodox priest, while his mother, Đuka Mandić, was the daughter of an Orthodox priest. Nikolas brother was Dane Tesla (1848  1861), and his three sisters were Angelina Tesla (1850), Milka Tesla (1852), and Marica Tesla (1858). Nikola later on credited his eidetic memory and creative abilities to his mothers genetics and influence, who had not received a formal education, as she had a talent for making home craft tools and mechanical appliances, and the ability to memorize Serbian epic poems. In 1861, Nikola attended primary school in Smiljan where he studied German, arithmetic, and religion.

In 1870, Tesla moved far north to Karlovac[25] to attend high school at the Higher Real Gymnasium. The classes were held in German, as it was a school within the Austro-Hungarian Military Frontier. Here, he became interested in electricity, and he was also able to perform integral calculus in his head. He finished a four-year term in three years, graduating in 1873. In the next years, he contracted cholera, was bedridden for nine months and was near death multiple times, after which he went southeast of Lika to Tomingaj, in order to evade conscription into the Austro-Hungarian Army. There he explored the mountains wearing hunters garb. Living in contact with nature made Nikola stronger, both physically and mentally. He also read many books while in Tomingaj, and later said that the novels of Mark Twain had helped him to miraculously recover from his earlier illness.

In 1875, Nikola enrolled at Austrian Polytechnic in Graz, Austria, on a Military Frontier scholarship. During his first year, he never missed a lecture, earned the highest grades possible, and passed nine exams (nearly twice as many as required). During his second year, Nikola came into conflict with a professor (named Poeschl) over the Gramme dynamo, when Nikola suggested that commutators were not necessary. Nikola claimed that he worked from 3 a.m. to 11 p.m., no Sundays or holidays excepted. His professors wrote to his father about this, warning that unless he were removed from the school, Nikola would die through overwork. At the end of this second year, Nikola lost his scholarship. Next, he became addicted to gambling. During his third year, Nikola gambled away his allowance and his tuition money, later gambling back his initial losses and returning the balance to his family. When examination time came, Nikola was unprepared and asked for an extension to study, but was denied. He did not receive grades for the last semester of the third year, and he never graduated from this polytechnic.

Next, Nikola moved to Maribor, where he worked as a draftsman for 60 florins per month. He spent his spare time playing cards with local men on the streets. In March 1879, Nikolas father went to Maribor to beg his son to return home, but he refused. Nikola suffered a nervous breakdown around the same time. On 1879 March 24, Nikola was returned to Gospić under police guard for not having a residence permit.

In January 1880, two of Nikolas uncles put together enough money to help him leave Gospić for Prague, where he was to study. He arrived too late to enroll at Charles-Ferdinand University; he had never studied Greek, a required subject; and he was illiterate in Czech, another required subject. Nikola did, however, attend lectures in philosophy at the university as an auditor, but he did not receive grades for the courses.

In 1881, Nikola moved to Budapest, Hungary, to work under Tivadar Puskás (1844 September 17, Pest  16 maart 1893, March 16, Budapest) at a telegraph company named the Budapest Telephone Exchange. Upon arrival, Nikola realized that the company, then under construction, was not functional, so he worked as a draftsman in the Central Telegraph Office instead. Within a few months, the Budapest Telephone Exchange became functional, and Nikola was allocated the chief electrician position. During his employment, Nikola made many improvements to the Central Station equipment and claimed to have perfected a telephone repeater or amplifier, which was never patented nor publicly described.

In 1882, Tivadar Puskás got Nikola another job in Paris with the Continental Edison Company. Nikola began working in what was then a brand new industry, installing indoor incandescent lighting citywide in the form of an electric power utility. The company had several subdivisions and Nikola worked at the Société Electrique Edison, the division in the Ivry-sur-Seine suburb of Paris in charge of installing the lighting system. There he gained a great deal of practical experience in electrical engineering. Management took notice of his advanced knowledge in engineering and physics and soon had him designing and building improved versions of generating dynamos and motors. They also sent him on to troubleshoot engineering problems at other Edison utilities being built around France and in Germany.

In 1884, Edison manager Charles W. Batchelor (1845 December 25  1910 January 1), who had been overseeing the Paris installation, was brought back to the USA in order to manage the Edison Machine Works, a manufacturing division situated in New York City, and asked that Nikola be brought to the USA as well. In June 1884, Nikola emigrated to the USA. He began working almost immediately at the Machine Works on Manhattans Lower East Side, an overcrowded shop with a workforce of several hundred machinists, laborers, managing staff, and 20 field engineers struggling with the task of building the large electric utility in that city. (to be continued)