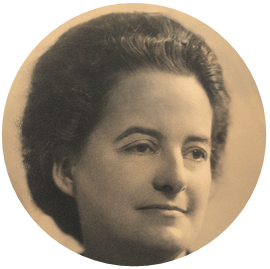 On 1895 June 30, the 15-years old Alice was visited by a stranger. In her autobiography, she describes him as a tall man dressed in European clothes and wearing a turban. This strange man told her she needed to develop self-control to prepare for certain work he planned for her to do. This later turned out to be the creation of New Age via the publication of more than twenty books, together with educational and meditation work with a worldwide impact.

At the age of 22, Alice was given an auxiliary position with the British Army through the Young Womens Christian Association (YMCA) and. This took her to India, where she met around 1905 Walter Evans from the USA, who was studying for the Episcopal priesthood. In 1907, upon her return to England, she and Walter married. Next, this newly married couple moved to the USA, where they settled in California. Here, Walter was ordained in the Episcopal Church. Walter and Alice had three daughters: Dorothy, Mildred, and Ellison. Alice was then a busy ministers wife, and Bible class teacher. However, their marriage failed due to his appalling temper. The couple separated in 1915, and they divorced in 1919. Then followed a difficult period for Alice, in which she worked in a sardine factory in Pacific Grove, California, to support herself and her three daughters.

In 1915, when her marriage was almost over, the 35-years old Alice discovered Theosophy. On September 1, 1915, she was admitted as a member to the Theosophical Society in the USA as Mrs. Alice Anne Evans. She is listed as one of 15 founding members of the Pacific Grove Lodge (formerly Monterey Lodge) in California on the charter dated 1915 September 17. In 1918, she was admitted to the Esoteric Section. She spent the next several years working while studying the new Theosophical ideas  attending meetings, poring over The Secret Doctrine by Helena Blavatsky, and attempting to integrate these ideas with the strict Christianity of her upbringing. Her mystic side found certain ideas, such as karma and the existence of the Masters, appealing and helped her during this difficult time.

In 1917, she moved to Hollywood, California, where she at first worked in the vegetarian cafeteria of Krotona. There, she met the 8-years younger attorney Foster Bailey, born on 1888 March 16 in Fitchburg, Massachusetts, as the son of William Kimball Bailey (1853 May 9  1927) and Cora I. Wheeler (who married on 1881 December 26 at Denver, Colorado). Four years earlier, in 1913, this Foster Bailey was initiated into the Charles W. Moore Lodge of Freemasons. He eventually rose to 33rd degree, and wrote The Spirit of Masonry.

In 1920, Louis William Rogers (1859 May 28  1953 April 18), commonly known as L.W., was elected President of the Theosophical Society in the USA. This was disappointing to both Foster and Alice, and they next seized to be of service to the Theosophical Society. Another version of this story tells us that both were dismissed. On 1921 March 14, Foster and Alice were married in Manhattan, New York. In 1922, Foster started the Lucis Trust Publishing Company. In 1923, Foster and Alice Bailey the Arcane School, which was a school for the disciples of the coming new era (nowadays know as New Age). The schools mission was to teach students on how to further the Great Universal Plan, guided by the inner hierarchy of spiritual masters under Christ.

Alice Bailey described the majority of her work as having been telepathically dictated to her by a Master of Wisdom, initially referred to only as The Tibetan or by the initials D.K., later identified as Djwal Khul. Her writings bore some similarity to those of Helena Blavatsky, and are among the teachings often referred to as the Ageless Wisdom. Though Alice Baileys writings differ in some respects to the Theosophy of Helena Blavatsky, they have much in common with it. She wrote on religious themes, including Christianity, though her writings are fundamentally different from many aspects of Christianity or other orthodox religions. Her vision of a unified society included a global spirit of religion different from traditional religious forms, and including the concept of the Age of Aquarius.

In 1951, Foster Bailey married a student of his Arcane School named Mary. Foster and Mary Bailey worked together for more then 25 years. Foster Bailey died on 1977 June 3 in New York City, New York, at the age of 89 years old. In 1990, Mary Baileys book A Learning Experience was published.