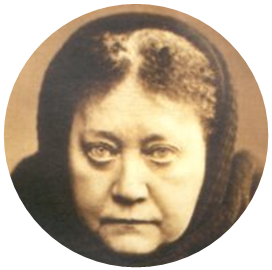 Helena Petrovna von Hahn (1831 August 12 - 1891 May 8) married on 1849 July 7 at the age of 17 to Nikifor Blavatsky. In 1875, this madame Blavatsky founded the Theosophical Society together with disinformer Henry Steel Olcott as an attempt to attract anyone who became disappointed in any religion, especially Christianity. The overall goal of organizations like the Theosophical Society is to lead gullible people away from the One True God. Wholly Science is doing the very opposite.

For instance, in the book The Secret Doctrine (released in 1888), she paid homage to Lucifer, the one who fell from Heaven according to the usual English translation of Isaiah 14:12. Blavatsky stated in that book that Lucifer is the Logos, and also the Savior. She proclaimed: It is Satan who is the God of our planet and the only God. This clearly reveals that she was a satanist, which makes Theosophy a Satanist religion. She was must certainly not hiding this, as she also named the magazine that she published Lucifer.