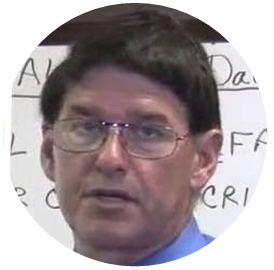 David Wynn Miller was born on 1949 September 17. After a botched surgical operation, he was allegedly physically dead for half an hour. Somehow, he came back to life, after which he allegedly did not sleep for eight years. After that, he required only three hours of sleep a day. He claims to be an expert in many different fields, including being a judge. His websites name dwmlc.com is probably an abbreviation of David Wynn Miller legal counselor. Furthermore, it is said that he was a high-degree freemason. In September 2012, during a non-stop presentation of 9½ hours (titled Quantum Grammar Seminar), he presented his language-based solution to allegedly all legal issues, which he named the Correct-Sentence-Structure-Communication-Parse-Syntax-Grammar. For his method of parsing, he defined the following cipher codes (where ownership (6) is also referred to as lodial, and a noun (7) as a fact):

In that presentation, he also claimed that his physical body has stopped aging. On that video, he indeed looks much younger than 63 years of age, but that might also be a result of perhaps painting his hear black (or wearing a toupee).

On 2018 June 22, David Wynn Miller (or David-wynn: Miller as he preferred to be called, so: David hyphen wynn full colon Miller) passed away. He offered his legacy to all benevolent humans. Among his followers are Russell Jay Gould, Romley Stewart, Jason Matthew Glass and Mark Christopher.