By clicking on the corresponding link, you will go directly to that part of this newsletter.


Do you understand the essence of my lifes work?

My name is Johan Oldenkamp, and I have developed a scientific method to reach the highest state of consciousness. Hardly anyone realizes that science and spirituality are in fact two sides of the same coin or medal. I have been able to discover the underlying logic of this gold medal.

The biggest barrier to ascending to a higher level of consciousness comes from ordinary language. As a result, ordinary people consider themselves richer than they actually are. They think, for example, that they have a soul and a spirit, but what they mean by these words is only their feeling and their thinking.

My scientific ascension method starts with from scratch re-educating our understanding of reality. Everything we have learned in school and afterwards lacks a logical foundation. Nevertheless, knowledge of the so-called natural sciences is essential to reach a higher consciousness according to this method. Otherwise, it would be nothing more than phantasism, just like almost everything else that is offered as spirituality (but which has absolutely nothing to do with this). Furthermore, do not confuse university theories with genuine Science, for that academic fiction is full of circular reasoning to disguise that we are really dealing here with the famous fairytale emperor without clothes.

As its founder, I have named this whole-making (healing) reunion of sound Science and solid Spirituality as Wholly Science. The unerring method based on this with what is called enlightenment (or inner liberation) as a guaranteed result is the Wholly Science Education Program. The introductory offer to get a taste of this costs only € 17 (or the equivalent of this amount in any other currency). For this you will receive an e-book (of 60 pages) in which each of the five chapters is also explained in an accompanying online video presentation. If this then tastes like more, you can continue with this education program that comprises a total of seven levels.

A side effect of this (re-) education is that you will increasingly know how to disconnect yourself from this increasingly maddening society. You will then also understand the underlying logic of the agenda behind this. Wholly Science is the all-encompassing paradigm with which the underlying logic in every field can be exposed. It is therefore wise to start following the Wholly Science Education Program as soon as possible. And if you have already started with this, then quickly continue with it.

An important part of my lifes work is retranslating the Bible. Not only is this book collection the worlds best-selling book, it is also the most manipulated one. After each time literally translating the most original text, I succeed time and again, thanks to my knowledge of Wholly Science, to get to the true Spiritual meaning of it. I have been doing this for almost five years now, and have completely retranslated two Bible books and explained their real meaning. In addition, I have retranslated and interpreted part of about half of the other Bible books in the now 118 episodes of Wholly Scripture TV.

In episode 16 of this, I discussed the Gospel parable about building our house (as described in Matthew 7:2429). The fool builds this on sand, and the wise on rock. The common interpretation of this all-important parable completely misses the point. In that common interpretation, it is erroneously claimed that the wise would have a rock-solid faith. However, it is the fool who is the believer, because whoever believes in something simply does not know this for sure. And what can happen to houses that stand on sand, occurred last week in parts of Germany and this week in parts of China. It does not matter how strong the house itself is, because if it is not on rock-solid ground, it can collapse when this sand gets washed away. 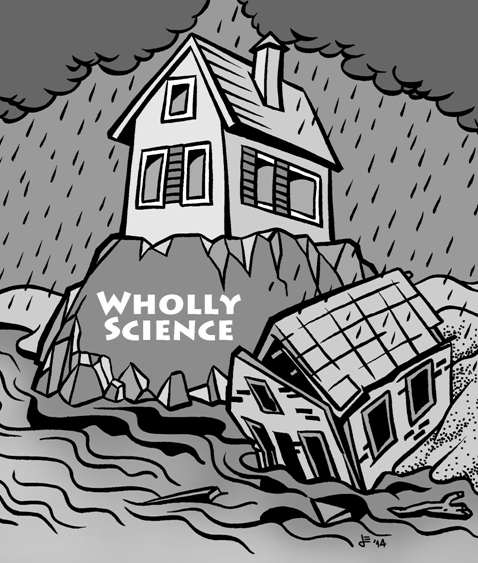 As I explain in that episode, the house symbolizes our understanding of reality. Each of us is responsible for our own house. Those who have not built their house themselves are foolish, which is the case for almost all people. The reality is not as we learned it in school or as told to us by other foolish people. This is only about the illusionary reality, which in Wholly Science is referred to as the Shadow World. Wise humans know this, and therefore build their house only on what is certain (the rock-solid truth).

In short, foolish people believe and a wise humans know. This also has everything to do with the new Age in which we have arrived (since 2012). The central theme in the past Age of Pisces was believing. For over two thousand years, we have believed in salvation from outside, and the vast majority of people still do. But the central theme in the current Age of Aquarius is knowing. The new and all-encompassing paradigm in this new Age is Wholly Science, as it enables wise humans to eventually know everything, including self-liberation from within!

The original meaning of the constellation of Aquarius is Lord of the Waters. This makes it clear that this consciousness energy is above the waters, referring to our fluid feelings. And just as fish are unaware of what water is (because it is everywhere to them), Pisces consciousness energy does not help us to transcend our own feelings. In fact, all pseudo spirituality including any religion is based precisely on this energy and thereby traps believers in their own illusions. Believers have even been so brainwashed by this that they believe that their faith (in their own self-made prison) would be their strength. They hypnotize themselves and only find out after their physical death (in the afterlife) that they are imprisoned.

But this prison-by-believing is much bigger than just ones religious dogmas. It encompasses every form of believing, as any belief is nothing more than a concealment of the lack of knowledge. Someone who knows something for sure has no need for believing. Only people who are not sure about something seek refuge in (superstitious) beliefs. All believing people are foolish.

Whoever believes in any religion, whether organized, ancient or modern, is a fool. Anyone who believes in the mainstream news presented to us is a fool. In fact, anyone who believes in that which is mainstream, such as regular health care, the puppet government, fiat currency, and university science, is a fool. Especially the latter requires additional explanation, because ignorant people just dont want to realize that also mainstream science is a belief system, which I refer to as scientism. This scientism has as much to do with true Science as a brothel has to do with chastity. It is therefore nothing but the hard (rock-solid) truth to refer to anyone who professes scientism as a mental prostitute.

Now that the difference between the believing fools and the knowing wise has been explained in detail above, let us next have a look at the current situation on this planet. Is the global madness that is getting more and more insane the fault of the foolish or of the wise? And why are the fools even so foolish that they now try to put the blame on the wise?

I am asking these questions here to encourage you as a reader to think about this for yourself. I already did this a long time ago, even before this madness was getting implemented. Below are my findings. But as always, I urge you not to believe a single word of this. Ever since my first revealing presentation in 2008, I have been asking my audience this. I do hope that more and more people will really understand what I mean by this, which is build your house on rock!

The faith of the foolish is causing further and more trouble for humanity and all biological life on this special planet. If these fools would listen to at least one wise human, this could be the turning point for humanity. That is also the meaning of Stand & Deliver, sung by Eric Clapton (1945).

The foolish people seem to be in the majority, but that is because the wise humans (in training) are less recognizable. Were they all wearing open blinders, we would see that there are many more of us than we thought.

Nothing human is alien to us. I like to feel connected to like-minded humans, and Im sure you do too.

Anyone who has purchased at least the introductory offer to the Wholly Science Education Program is every Sunday welcome to our online study group meetings. You can find the start time in your time zone and other information via Pateos Agenda.


Frequency of this Newsletter

Only those who have shown serious interest in Wholly Science will receive each newsletter. As an exception, this 64th edition has once again been sent to all newsletter subscribers. If you dont want to miss a newsletter anymore, then at least purchase the introductory offer mentioned above. However, if you believe that you could come to the Truth without Wholly Science, that is quite foolish of you. And on foolish people, I do not want to waste neither time nor energy. But passive foolish ones can fortunately come to active repentance, and that is why I am sending this newsletter to all newsletter subscribers.

Perhaps you now feel insulted. After all, you have managed to free yourself from many mainstream lies, because otherwise you would not be a subscriber to this newsletter. But then, why do I consider you to be foolish? That is because without Wholly Science you remain trapped in all those alternative lies, of which New Age is the main purveyor. You cannot fully wake up without Wholly Science, because there are also degrees of awakening. The biggest pitfall is believing that you would be awake without knowing who you really are. Wholly Science allows you to get to know your true self, but remember that true self-knowledge is just as sweet as pure lemon juice. Foolish people spend their entire lives avoiding confrontation with their true selves by daydreaming that they are already their true selves. That is why I consider you to be foolish, because this also applies to you. The same goes for me and the other serious Wholly Science students, but we know that our ordinary self is a self-created illusion. And therefore, we are no longer foolish people, but wise humans in training.


Thank you for reading this Pateo Newsletter (and possibly also forwarding it, and/or republishing it).

With Love and Wisdom,

This Pateo Newsletter is also available in Dutch.